The best and worst aspect of web development is that approaches change reasonably often, and sometimes even for the better! I’m catching up on some of these trends:

They all deserve their own posts. This is an attempt to highlight the interplay between these topics, with a focus on integration and security rather than implementation. I’ll be looking specifically at a pretty powerful combo for modern collaborative web applications: NextJS with Apollo Client, Hasura GraphQL, and Auth0.

At the end of this post, you’ll hopefully have a better understanding about some strengths and weaknesses of a “hybrid” approach to rendering views with authenticated data in this particular stack. The specifics described here loosely follow a Hasura + NextJS tutorial.

Disclaimer: I have not operated this architecture in production (yet!), but learned enough to provide a “top-down” view of the moving parts.

Hasura “wraps around” a standard relational database schema, and has a refreshing approach to keeping business logic out of this layer: The 3-factor app architecture. In short, the API layer provides the boilerplate for CRUD and authorisation, and can be extended via custom resolvers running in serverless functions elsewhere. Instead of providing a broad execution environment or web framework, it enables reliable event streams which can also be responded to by separately hosted serverless functions.

As an example, a restaurant booking would have roughly the following asynchronous flow:

Serverless isn’t a mandatory feature, but having a “one function per event type” constraint keeps the business logic small and cohesive. And if your serverless functions don’t rely on other more constrained resources (such as writing back to the Hasura-managed database), they’ll scale really well!

While this architecture looks close to traditional queue-based systems, there’s a certain simplicity in using the database as a queue rather than a separate component. There are lots of traps in relational database queues, and Hasura only provides guarantees for “at least-once” and “out of order” delivery of messages. I haven’t used this system in production, but the overall adoption rates of Hasura makes me hopeful that they’ve solved this well for transactional use cases.

NextJS is a Javascript-based web framework built on top of React. By virtue of using Javascript both on the server (NodeJS) and in the browser, it blends the boundaries between where data can be fetched and rendered.

For “static” content (same for every viewer), it can pre-render pages at build time, or in a classic per-request server process. While it can render into static HTML, serving pre-rendered views through its serverless functions allows some neat tricks around incremental regeneration.

For “dynamic” content (e.g. authenticated or otherwise personalised views), pre-rendering usually isn’t practical. You can use NextJS as a traditional web framework, with per-request server rendering. Or you can use it as a static provider of files creating a Single Page App that handles data fetching and rendering on the client. Or … you can do both!

Rendering GraphQL data on the server and client with Apollo

Apollo Client can consume GraphQL data in both a server and client context. It’s somewhat framework agnostic, but has great integration to provide this data to React components. Unlike a standard HTTP client, it leverages the GraphQL schema to build up a smart cache. In an interactive browser context, this smart cache can be used for optimistic mutation results, updating your view before the server has even processed the state change. But it also makes it smart enough to know which queries have already been run, and can be retrieved from memory while the real query is still retrieving (potentially new) data in the background.

Apollo can introspect a React component tree to identify its data requirements expressed in GraphQL queries and fragments (via getDataFromTree()). With this knowledge, it can retrieve all data required for a given view on the server. NextJS kicks off this process via a custom getInitialProps() implementation and takes care of the rendering.

This is where it gets interesting: The data retrieved by Apollo on the server is serialiseable. It gets passed to the client, which can rehydrate it and avoid running the same queries again.

Live views via websockets with Apollo

Live views “bind” to remote data updates, which is especially useful in collaborative multi-user contexts. While the GraphQL client (Apollo) acts as a standard HTTP client on the server, in the Hasura approach it gets initialised as a websocket client in the browser. This setup allows subscriptions to GraphQL data, an essential component of the 3-factor app architecture.

Continuing from the intial rendering process above, here’s what it might look like to get updated data which are collaboratively edited by other users:

For simplicity, websockets are also used for “standard” GraphQL operations (queries and mutations) that could be performed via a HTTP client.

Auth0 is a flexible identity-as-a-service provider, and handles the hard bits of securing user information and authentication flows. Most importantly for developers, it provides SDKs for every conceivable authentication flow. Since we’re buliding an (initially) server-rendered web application, we’re focusing on OAuth2 for API authorisation tokens and OpenID Connect (OIDC) for login tokens.

In the case of Hasura, the recommended integration creates or updates “shadow” user records in the Hasura-managed database on every login request to Auth0. These user records will point to a unique identifier assigned by Auth0.

When Auth0 is asked to issue a token (e.g. through a login action), additional metadata can be added to the token identifying the user as well as their role in this application context. Most commonly this is implemented through JWT claims in an OAuth2 or OIDC flow. Since this information is contained in a signed JWT where only Auth0 holds the private key, it can be verified with Auth0’s public certificates within the API (Hasura). This kind of cryptography is essential to the delegation model between different services, especially when they involve untrusted channels and devices.

There are flows for Single Page Applications that don’t require a server environment to login and receive an access token that can be used for API access. This can be accomplished through auth0.js without any knowledge of NextJS. Apart from the complexity of securing this process in untrusted environments, it would also negate a main driver to fully utilise NextJS: Performing the initial render on the server, which would require authenticated requests to the API.

A server-based authentication flow and render process looks like this:

Did you notice that the access token is stored in two places as part of the authentication flow? 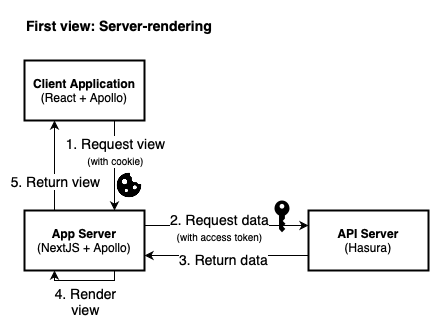 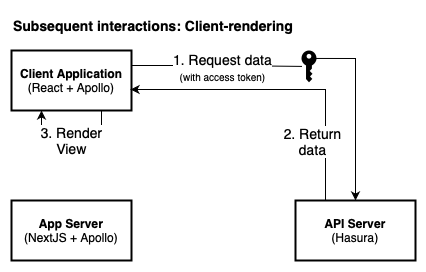 Compared to secured cookies, storing access tokens in the browser increases the security surface through Cross-Site Scripting (XSS) and Cross-Site Request Forgery (CSRF). This requires additional care in how the application is built. A safer alternative approach is to proxy API requests through the origin server with session cookies.

There are a lot of moving parts here compared to a traditional “monolithic” approach of many web applications. It’s an incredibly versatile approach, but also introduces many failure modes that simply don’t exist in applications where most of these workloads happen in-memory rather than over the network.

I’ve really enjoyed working through the details here. Not having operated this architecture in production, its too early to form an opinion, but I have some initial impressions: